For those of you reading this blog besides my family (yeah, you two know who you are), I should tell you that my daughter used to have a Small World room. It's being slowly changed to a Princess Room now, but once upon a time it was small world. My wife and I had gathered quite a few Small World things, and with just a little bit of paint and craft stuff from Michael's we were able to kinda theme her whole room. It was an apartment so most of my really elaborate ideas were not possible (no painting the walls except for one colored accent wall). One idea I did have though was to recreate the big smiling clock face from the attraction. Here he is below... 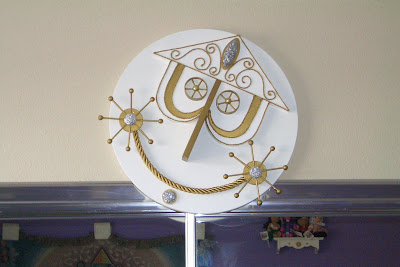 It really wasn't as hard as you would think. Somewhere online I found the clockface all drawn out in a front view. I think it was taken from blueprints because the proportions looked dead on. I used this to plan everything out. Down at Home Depot I bought a prefinished white laminate disc. I didn't plan for it to be finished like this- I just figured I'd by a round piece of wood, but this worked out great. At Michael's (local craft store) I found some little paper mache round boxes for the eyes and cheeks (see the second picture below) as well as lots of doweling and wooden spheres, and of course the secret to any Small World decor- lots and lots of glitter. 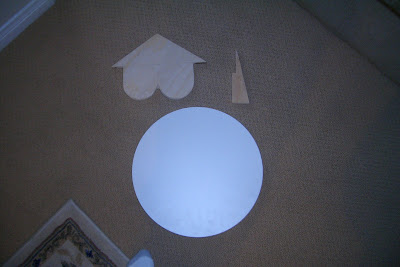 Above can see here the circle piece and the two simple pieces I cut out of playwood to form the face (and a bit of my sock at the bottom there!) 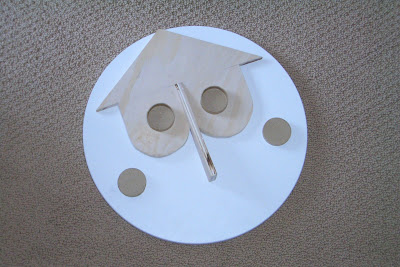 Here's the main shapes just sitting in place to get the idea. I really didn't document this process as thouroughly as I could have, but you can see below, I've painted the nose, and the gold portions around the eye. 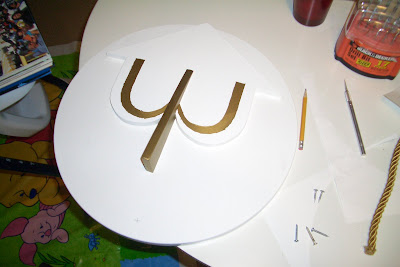 Here not only have I screwed the top layer down (and attached that nose too, though I don't remember how- probably through the back), but I've also used some thin gold braid (from the fabric section of Michael's) to border the eye gold and the triangle. The braid stands in for the raised metal that is used on the real clockface, and I don't believe it actually is on the bottom of the triangle, but I thought it helped defind the space better and mask off the gold eye paint. 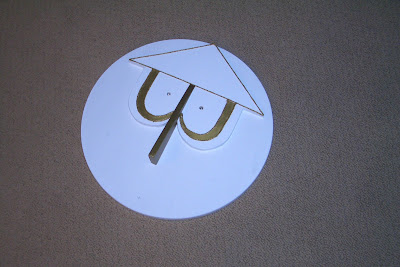 Ok, here's where I skipped a lot of steps. I used bigger gold braid for the mouth (again, standing in for metal) and placed the now painted gold circle boxes over the ends, then hot glued them in place. On top of these I used the doweling and wooden sphere's to make the little sunburst shapes that go over the cheeks, glued those down, and glued a wooden button covered in silver glitter on that. The eyes were constructed similarly: The box was glued on open side up and I made a different starburst of 1 sphere surrounded by doweling (mine only has 6 spines, the real one has many more. Looks like they used a small wheel of some sort). The scrollwork on the triangle is all thin braid glued into place. The shape under the chin is a wooden button with glitter again and the shape on the traingle is a piece of glittered foam. All in all I was very happy with this. The room overall was not all it could be but little things we did like this made it neat. I even put a picture hangar on the back at an angle so that the clock is perpetually tilted mid-tick. Now if someone can just tell me a good way to get it to rotate back and forth. Now that the Princess room is going in, I've salvaged it for myself. 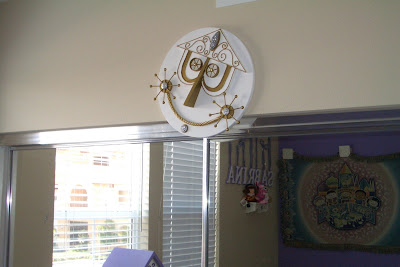 Here's something a little different for me. My brother David owns MAWL Wine, a wine store in Garden Grove California. Aside from the frequent tastings he arranges, he's recently begun an organized tasting course, called Palate Builders and he asked me to do some art for it. 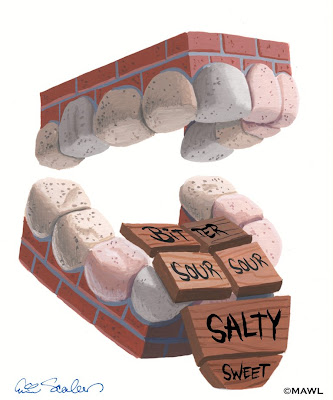 He wanted a mouth and tongue that looked constructed, and we talked about steel girders and wood. The girders seemed a bit too structural for the design of a mouth so we did brick, stone and wood instead. Kinda fun to stretch out of my Disney character mode once in a while.
Posted by Eric Scales at 9:32 AM No comments: