Since we're deep into reading the Harry Potter books, my daughter is going trick or treating as Hermione this year. Everyone have fun tonight! 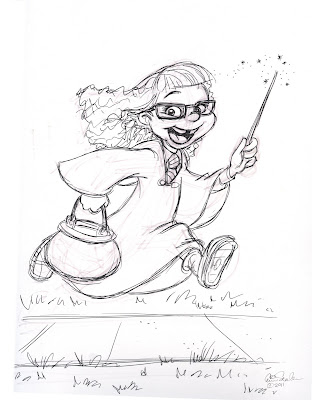 21 Days of Halloween Day 20- The Sackman 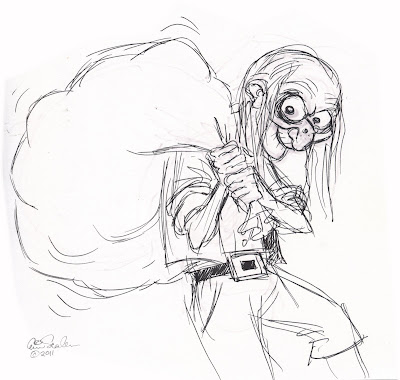 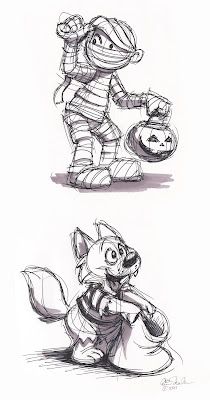 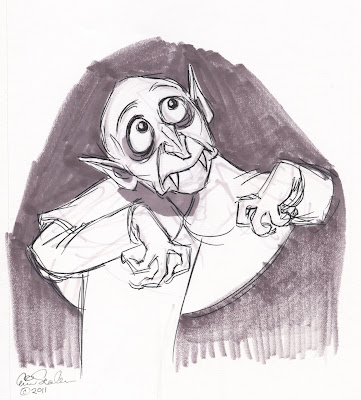 21 Days of Halloween Day 17- Revenge of the Cat Creature

This felt more cat than wolf-like to me, and the Cat creature episode of the old Scooby Doo cartoon scared (and fascinated) the bajeezes out of me when I was a kid. 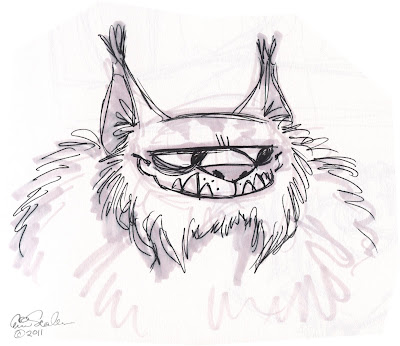 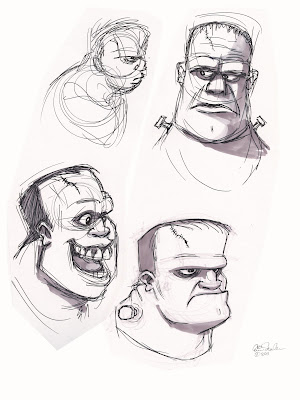 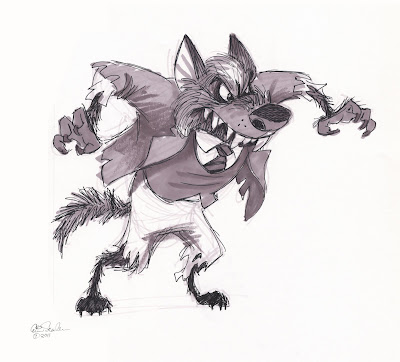 I always pictured something like this under my bed.

Yet another version of this concept I put up yesterday.

Click HERE to see it drawn fullsize.
Posted by Eric Scales at 12:17 AM No comments:

I did something similar last year. I think it's inspired by the lore of the Haunted Mansion, with the forlorn bride haunting the halls. 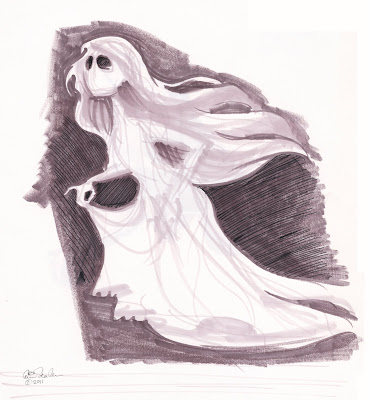 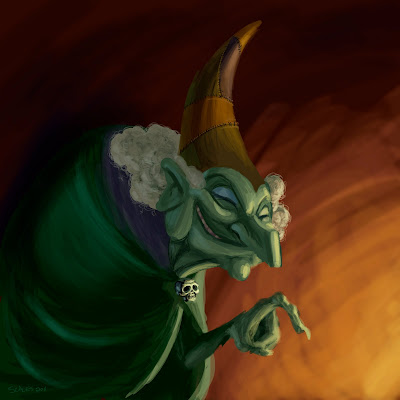 This is based on a sketch I did a few years ago. I originally meant to paint it in guoache, in a nice graphic style, but since I'm rediscovering my Wacom, I thought I'd try it digitally this time. 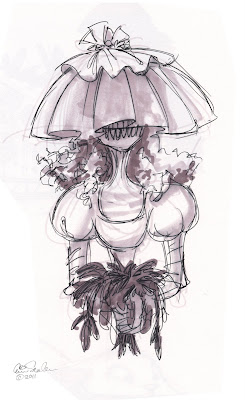 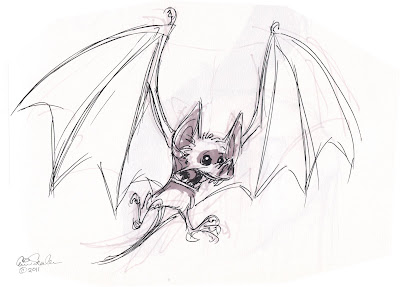 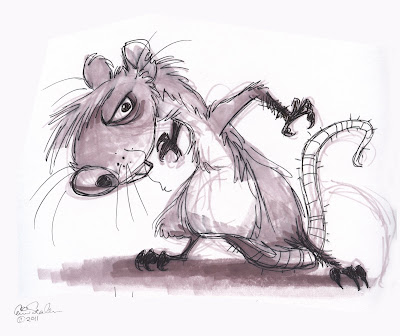 
Click HERE to watch it full size on odosketch.com .
Posted by Eric Scales at 12:01 AM No comments: 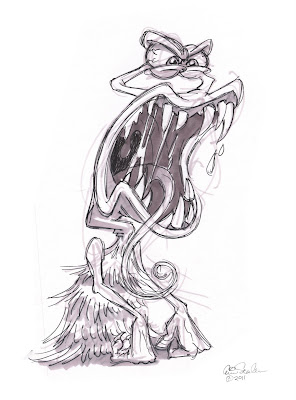 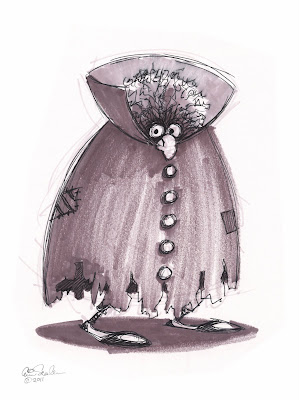 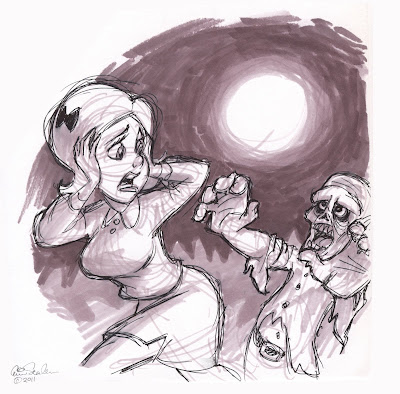 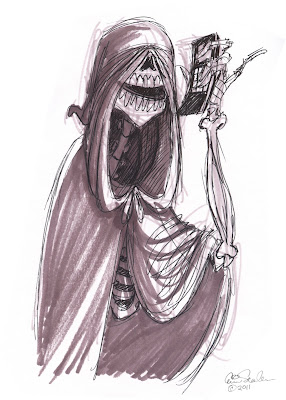 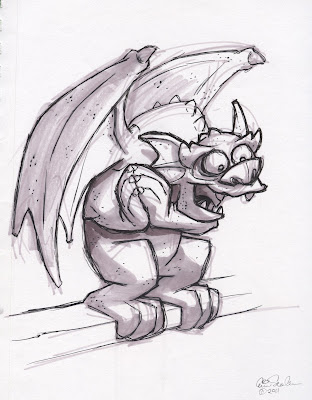 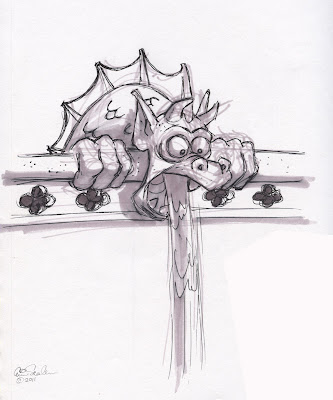 21 Days of Halloween Day 2- Jack of the Lantern 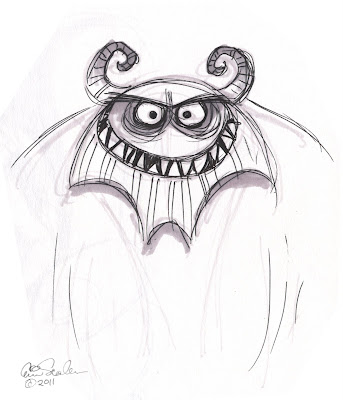 One last normal post before I begin my Halloween posting tomorrow. When last we left the awesome puppet that Jarrod Boutcher was making based on my sketches, the poor little guy was naked. Actually, Little Brother doesn't mind being naked, but at his family's insistence he usually wears a bit more than that. He has several favorite shirts, all Spider-Man, and generally prefers to go pantsless, with only his diaper down below. 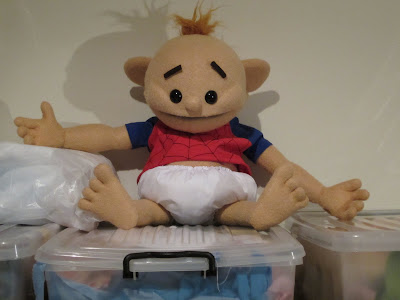 I thought Jarrod would simply be able to go down to the store and pick up a boys Spider-Man t-shirt, cut a whole in the back for my arm and slip it on the puppet. Turns out due to the unique proportions of the puppet, he had to make it from scratch. Not only did he sew the shirt, but he also screened the webs and Spider design on. What a ton of work making a puppet is- not for me, but certainly for someone as thoroughly dedicated as Jarrod. 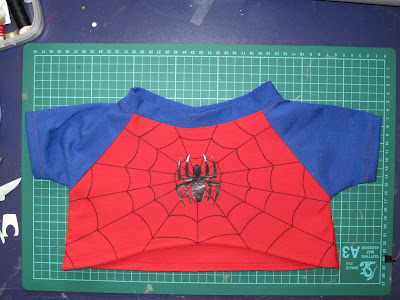 Below you can see the finished product, Little Brother, standing looking cute and seemingly innocent, next to my original sketch which suggests his other nature. 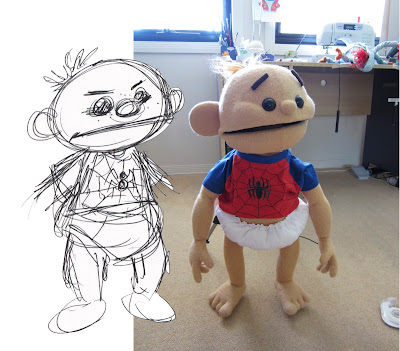 And here he is, again compared to my original sketch, showing his short temper. Sometimes he forgets that he's not the boss. 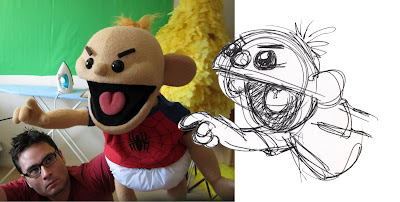 To check him out in action, click this link to see the video that Jarrod posted of him. I can't wait for him to show up on my doorstep! In the meantime, don't forget that tomorrow starts the 21 days of Halloween on this blog, 21 spooky sketches, one for each weekday of October. Come back every day, tell your friends, and leave comments! See you then!
Posted by Eric Scales at 10:45 PM No comments: