I'm so flippin' excited. Jarrod has made amazing progress with the puppet he and I are collaborating on. Below you can see the head, with the skin tightly sewn on. Notice how the cheeks which were previously foam forms, are now just soft curves under the skin. The silver wires that you see are the eyebrow mechanism. Little Brother has a hair trigger temper- tell him ,"no" and he is not happy. 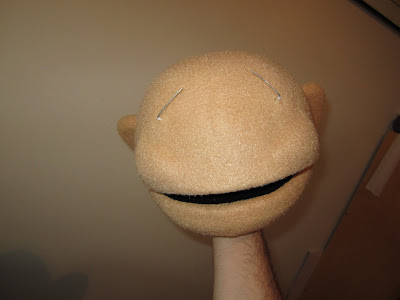 Here you can see all of the pieces more or less assembled. Love that he gave him doll joints for the arms and legs. This is really going to look and move like a real kid (or at least a professional puppet) and not something from your local toy store's shelf). 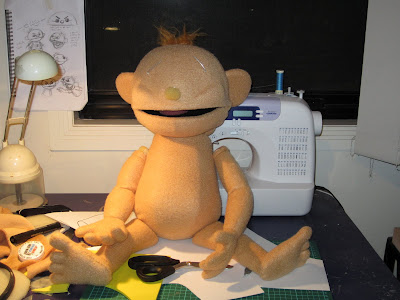 I don't even have words for the final picture. Awesome isn't nearly adequate. 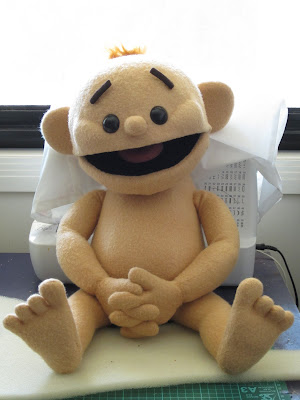 I think I mentioned that Little Brother is obsessed with Spider Man. So I've asked Jarrod to put him in a kids Spider Man shirt, and a big puffy diaper (Little Brother doesn't like wearing pants). I can't wait to see the next update! Be sure to check out Jarrod's blog and website, not only for a few other pictures of this puppet, but also for a ton of the most amazing character puppets you'll ever see. 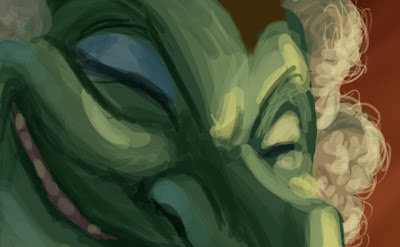 This year there are 21 weekdays in October, and for each and every one of those I'm going to post a Halloween piece of some sort. The delightfully dark doodling starts October 3.
Posted by Eric Scales at 1:11 AM 1 comment:

Down in Fraggle Rock Pt 5

Boy it's been a long time since I've worked on this one. I wanted a project to keep me motivated to practice my digital painting, so I figured a big free form group shot of a bunch of Fraggles would be good. I'm just kind of making each one up as I go along, not worrying about the overall layout or anything, but of course trying to get some good personality in there. The reason I've neglected is so long was that my Wacom was really acting up. My stylus finally died, and after getting a new one I find that that seems to have solved most of the problems I was having. So enough talking, check out the progress below.

This is where I left off. 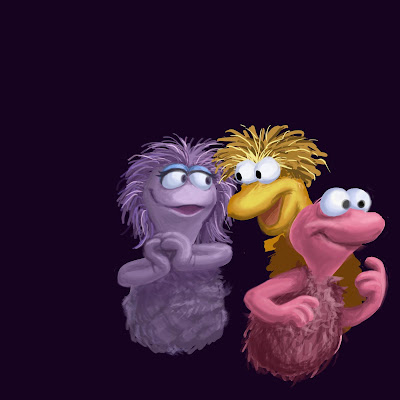 So I blocked in a new Fraggle. I really wanted to make this guy unique. So often the background characters were meant to just blend in, and not really have unique features. I wanted to make this guy old, with grayer colors overall, a beard, and a hat. I kinda sketched him looking into his hands. I think eventually I'm going to put a doozer into his hand, but didn't have time to do it tonight. 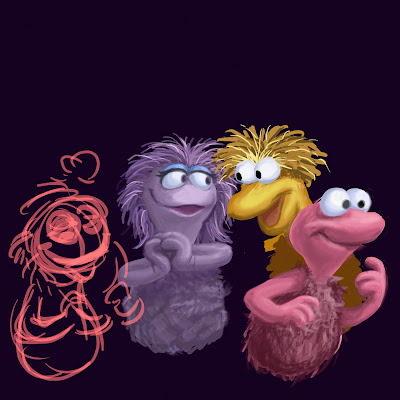 You can see below, just barely blocking in the actual face, I've already lost a slight tilt to his head that was in the original sketch. I didn't notice this loss till after, and as I still like the end result, I didn't bother to fix it. Still, often there is something subtle about the sketch that is lost if you're not careful. 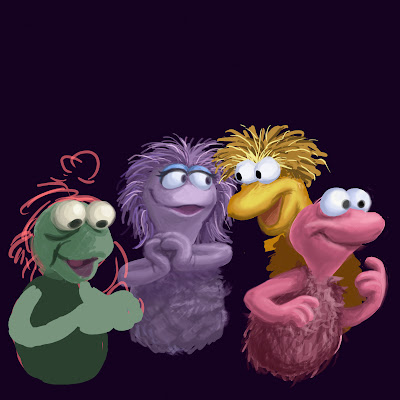 The beginning of facial details. Some bags under his eyes and liver spots or freckels on his nose. 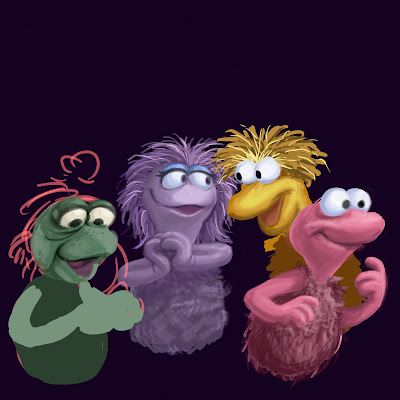 Fur on the body and the arms are defined now. Love making these little guys look soft and squishy. 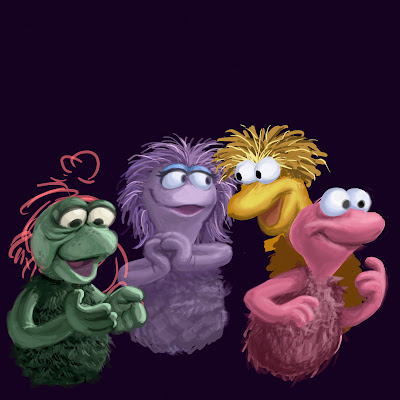 Here's his beard. I've really gotten a bit more extreme (realistic?) with the lighting on this guy, which means I might go back and adjust it on the others. 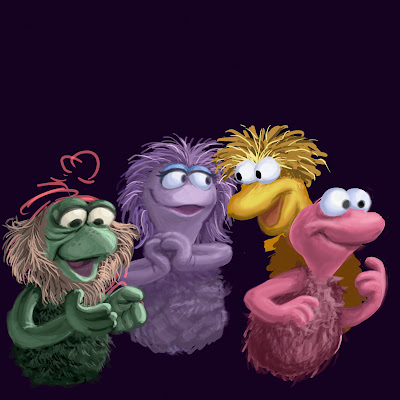 And finally, his hat. I seem to remember that the fraggles wore some sort of hat like this, though it looked like it was carved out of a gourd or something. But I felt the overall shape looked a little too Smurfish (especially with that Papa Smurf-ish beard), so I wanted mine to be a bit more angular. And I tried to make it look like a patchwork. 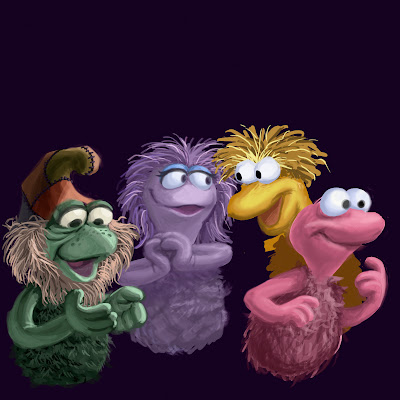 That's all for today. I hope to work on this a lot more frequently.
Posted by Eric Scales at 12:14 AM No comments:

Little Brother: The Puppet Pt I

I'm collaborating with super talented Puppet Designer, Jarrod Boutcher on a puppet. I've mentioned a few times, that my daughter likes to play a game we call Little Brother. She plays herself, or more recently a teenage version of herself, and I play her bratty 2 year old brother. As such, I get into lots of trouble and she acts as the authority. She gets to punish, yell, and be the sibling whose good at just about everything. I think it's very therapeutic role reversal for her, which is why I've played it with her for so many years now. However, it is a bit repetetive and awkward for me. How many times can a grown man pretend to be a two year old? Anyway, when I was discussing with Jarrod about a puppet that I'd like to order, it suddenly dawned on me that a Little Brother puppet would make this game a lot more enjoyable. I have Little Brother's personality more well defined than his actual look, and since I trust Jarrod's design instincts so well, I've given him lots of description but only a few rough sketches. 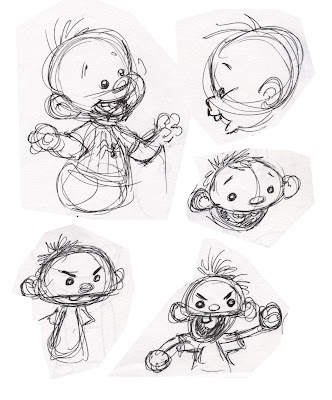 The page of drawings above didn't feel quite right. The two at the bottom were better, but he looked too old. Little Brother should just past the toddler stage, where a kid is talking and walking and mobile enough to be trouble, but not old enough for school. Preschool maybe. We often say he's two but I think he's a bit older. 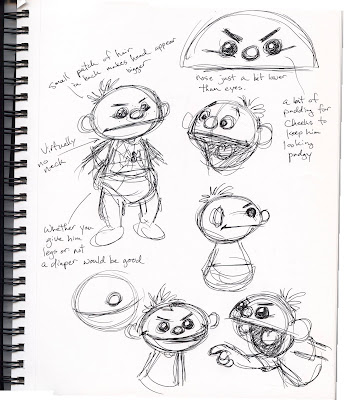 A lot of what I know about Little Brother has just come from playing the game so much and trying to be consistent with him. My daughter knows when I change something about him. He's obsessed with Spider Man, so I've asked Jarrod to put him in a Spider Man shirt. Other than that, he just wears a diaper. He's usually messy, with a small patch of uncombed hair. He goes from happy to angry really quick, so there's going to be an eyebrow mechanism to accomplish this. And I also wanted him to be able to kinda snicker mischeviously, and I noticed that Oscar the Grouch has a unique mouth, in that besides opening up and down, it also has a bit of side to side play. So I thought that would be good to allow little brother to snicker. Below are some of the progress shots that Jarrod has put on his blog. 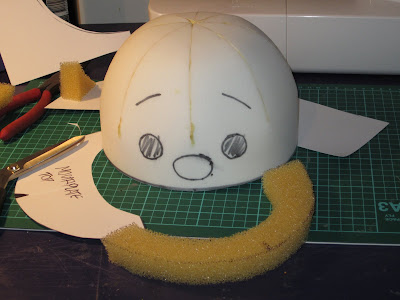 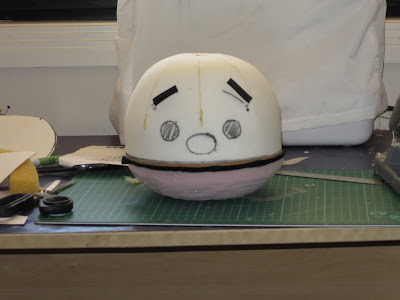 Look what a great match that is for the design on the second page of sketches. 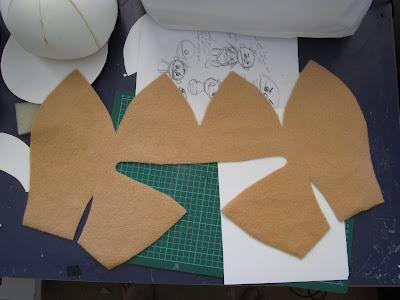 How do you cover a round form? Skin for the head. 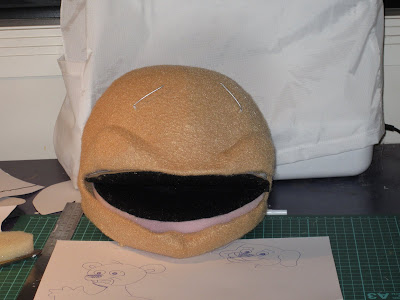 The skin, laid loose over the form of the head, with some foam for cheeks added. 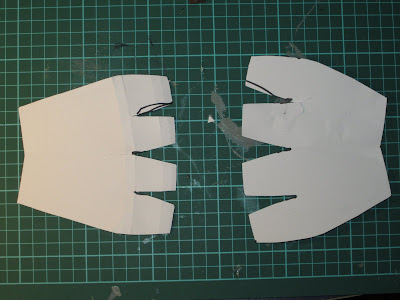 Believe it or not, these are arm patterns. 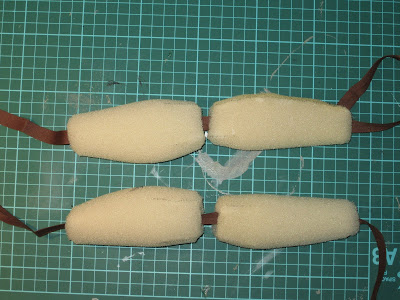 And the inner structure of Little Brother's pudgy little arms. 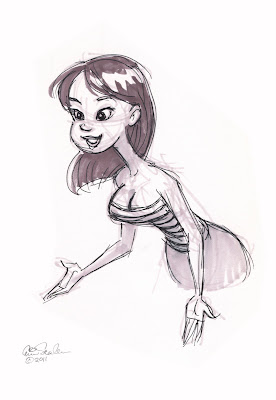 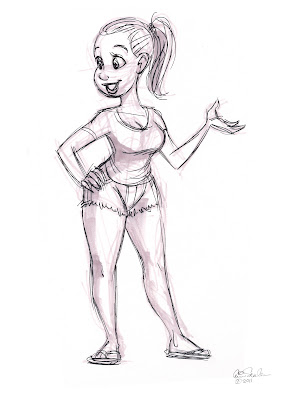 Another Odosketch for you today. This one owes it's inspiration to the great Barker Bird replica created by Kevin Kidney and Jody Daily a few years ago. Still my favorite piece of Disneyland Merchandise EVER created. Love having his colorful form brightening up my desk.


Click HERE to watch it being drawn full size.
Posted by Eric Scales at 12:01 AM No comments:

Click here to see it drawn full size!
Posted by Eric Scales at 12:01 AM 3 comments: 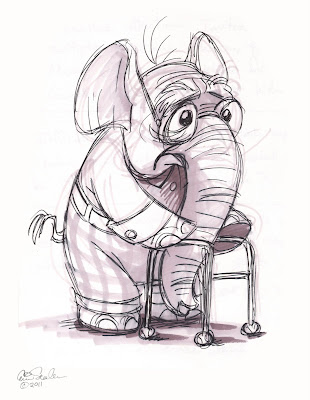