A few years back, I met an absolutely amazing puppet builder, named Jarrod Boutcher. Actually I only met him through his website, and email. A few months back, he ended up visiting Disneyland and spent quite a while in my shop watching me paint. But he didn't connect my name to our emails years earlier, and I had no idea who this guy watching me paint was. Thanks to my blog and a few comments he left, we eventually connected the dots and had a good laugh. Anyway, we've decided to collaborate on a puppet design, and I suggested doing some sort of Big Bad Wolf character. This undoubtably stems from my childhood terror/fascination with wolves. Below are several of the sketches I came up with. Most of them are not puppet designs persay, merely quick sketches to work out proportions and ideas. Jarrod is going to take what I've done and try and refine them into a workable design. 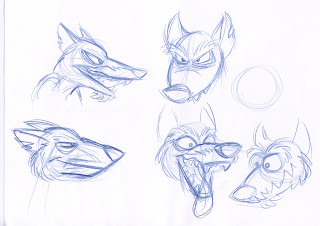 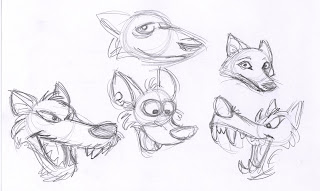 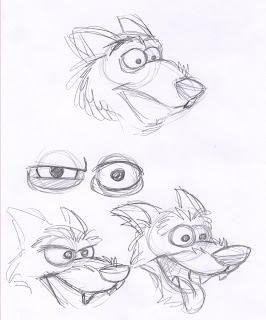 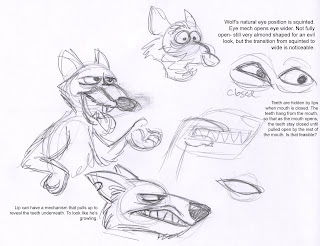 This final one in color at the bottom is the one I like the best. 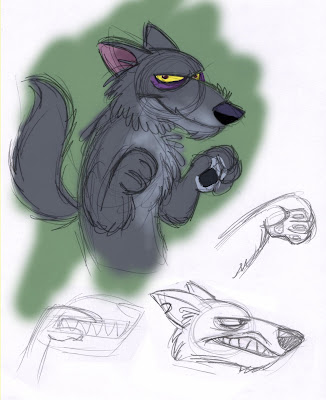 The only addition I am thinking of is maybe some article of clothing or unique feature that makes this character a little more identifiable, a hat or scarf or something. I think I always like my animal characters to have a bit of anthropomorphism like that, like the clothes wearing critters in the Uncle Remus stories- it helps tie them down to a time period.
I don't know what the final result will be. Jarrod has amazing instincts when it comes to puppet design, and I've asked him to please feel free to make changes and suggest ideas. He says he's going to show the progress on his blog which is seperate from his site and you can see it here. Check both our blogs for updates.
Posted by Eric Scales at 11:37 PM No comments:

Girl with a Martini 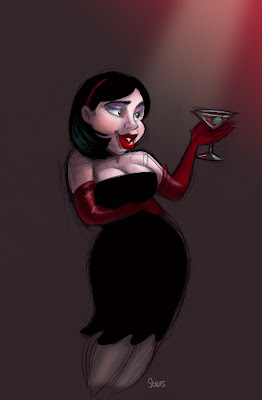 This started out as just another sketch. I was pretty happy with it, but didn't get around to posting it. Then I decided I'd play around with some digital color. I really just wanted to do something quick, but I just kept going. I think I'm happy with it.

Of course, then I discover another blog by a very talented artist, filled with more gorgeous girl drawings, but these are all traditionally done and painted. Now I feel like such a follower doing the digital color. Maybe I should watercolor now....
Posted by Eric Scales at 12:44 AM No comments:

I do a lot of digital coloring nowadays, but have never really drawn much digitally. I have a Wacom tablet, which is great for the coloring, but it's still a bit awkward to freely sketch while looking at the screen instead of your hand. But I've been looking a lot at Jenny Lerew's site, and her digital figure drawings are just amazing. With just quick bold strokes and a few finer details she draws the most beautiful sketches. Now a few clarifications- she's using a different kind of pad, one that I'm told is a screen in itself, so your hand is in the same place the image is. And, she probably draws in that bold quick style no matter the medium she's using. My drawings tend to be sketchy busy things, with lots of lighter lines and the finals being darker. Experimenting with my Wacom pad, I did this one: 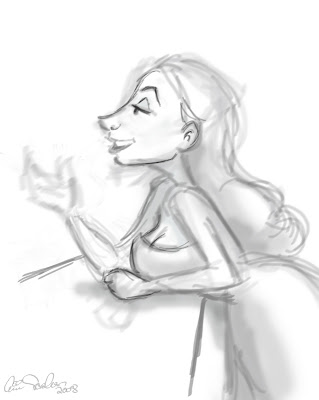 It's allright. It's on par with a lot of my figure drawings in my paper sketchbook. But it's not as bold and confident as I had hoped. Part of that lies with it being from my head and really not having a pose in mind until halfway through- you get a lot of false starts and remnants of a changing mind in the drawing that way. I also used a brush tool that was set at a pretty low opacity, which lets me start light and then go over and over a line to build up it's darkness- just like with a pencil. However that's a real good way to allow yourself to hem and haw, and not be very commited to the lines your'e butting down. A friend of mine suggested using a bigger bolder brush and set it to full opacity. 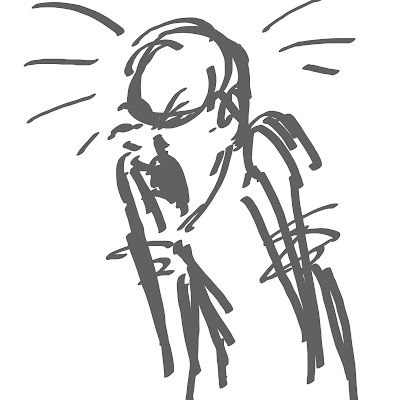 I have to say, the bottom one shows the most skill I think. It's not pretty, but it's confident which is what I was going for in the first place. I would still like to get to a place where I could draw the female form with such confidence, but that certainly takes a skilled hand, and it seems I need some more practice. If you haven't allready, check out Jenny's site.
Oh, and Happy 107th Birthday, Walt Disney!
Posted by Eric Scales at 11:45 AM No comments: 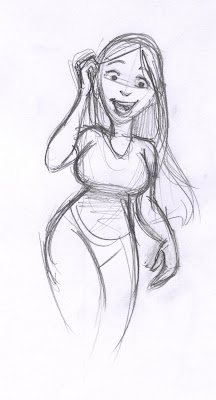 Mr. Toad, The Big Bad Wolf, and One Little Sheep

A bit of cross promotion today. 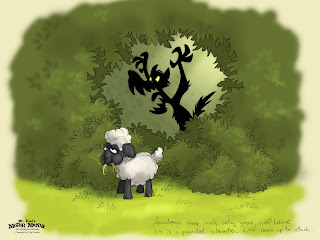 For anyone who hasn't explored my other links, I have a seperate blog that I use as a portfolio for my theme park design work. Keep in mind, for me, Theme Park Design is a goal- I don't actually do it yet, so nothing you see there is being built or designed by Disney, just me. Above is 1 panel of 2 for a small gag in a much larger attraction I'm designing, an all new version of a Mr. Toad attraction. This is a simple scene and I think that's why I like it. You can see the other pieces I've done for this attraction here.
Posted by Eric Scales at 12:28 AM 1 comment:

I hardly ever draw pretty girls. I mean if I'm out and about sketching and a pretty girl walks by, sure I'll try to draw her. But those are almost never pretty drawings. For one reason or another, those end up being overworked, figural sketches. I don't worry about the facial features or the simplicity of the form. When I draw those girls, it's almost always an unsatisfying result. But every once in a while I will just sit and try to draw a really pretty girl. A girl with a nice figure, and attractive features. I try and get it all down quick, but since it's all from my head I'm not concerned with matching what's in front of me. My only concern is putting down something that looks right. 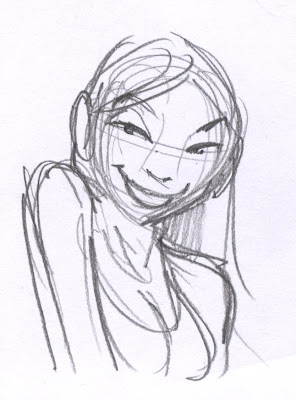 They aren't all great, but more often than not, I like 'em. My only hesitation in putting any of them up is that there are a lot of people who do these kinds of drawings a lot better than I do. To see some absolutley phenomenal "pretty girl" drawings that look like they just flowed into existence, check out the blogs of Chris Sanders, Jenny Lerew, and Frank Cho . They make my stuff look like gorilla finger paintings. But I'm stubborn so I'm gonna post mine anyway! Stay tuned...