I had a pretty unproductive week art wise. I have plenty of art projects that I should be working on, not to mention some fun ones, like this weeks Drawergeeks assignment. I had a big idea for a piece that was a little beyond my expertise, but I just didn't make myself do it. Maybe I still will. At the eleventh hour, I decided to at least add some quick digital color to the Star Trek sketch that I did earlier and just submit that. I did, however I accidentally closed it without saving, and decided that I didn't care enough about the final result to stay up another hour into that already late night to redo it. So just my sketch got submitted. If you want to see it again, it's here. If you want to see the other cool designs, check em out here.
Posted by Eric Scales at 7:13 PM No comments:

D is for Dingo

No I didn't cop out and simply choose a dog for my D Animal sketch. I chose a dingo. Course it looks like a dog. Who cares?! After capybara and buzzard I needed something straightforward. 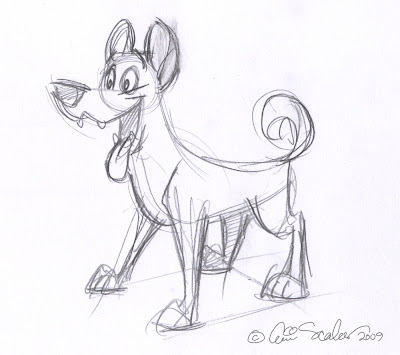 Posted by Eric Scales at 1:41 AM No comments:

I colored my monkey 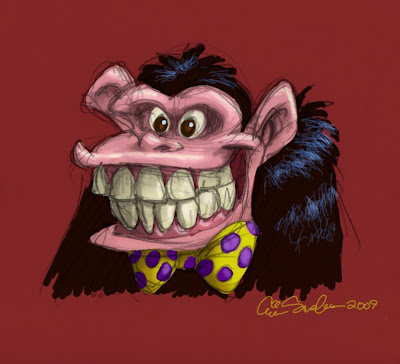 This is the sketch from my previous post.
Posted by Eric Scales at 11:00 PM No comments:

C is for Capybara

If you've never seen a capybara, be sure you check them out the next time you're at your local zoo. They're the world's largest rodents! Their head has a very distinct rectangular shape and they have eyes that strike me as both squinty and bored. Anyway, they seemed like the most interesting "C" animal for my alphabet series (this week in Color!). 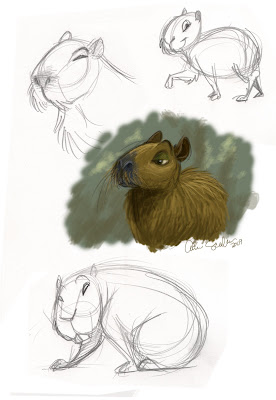 After being the last trekkie in America to see the new Star Trek Movie, I just felt I had to draw something Star Trek-ky. I never really have done any Star Trek artwork before, aside from some quick dry erase drawings in the Toontown Gag Factory Stockroom, because one of the other CM's there was/is a big trekkie and we'd always doodle ships on the whiteboard as we passed. But that sort of thing was always more technical than what I usually drew. Anyway, the upcoming Drawergeeks subject is Star Trek, and while I will hopefully have a more developed entry when that completion date rolls around, for now I have just this quick doodle. I only spent about 5 minutes on this, so please be kind. 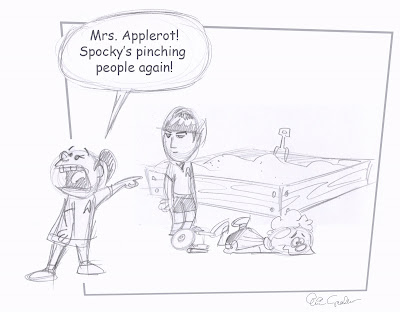 My intial thought was "Star Trek Babies" ala Muppet Babies (besides Ducktales, the single greatest cartoon of my generation- don't bother arguing, it's documented fact). The possibilities in a single frame would be endless- Baby Kirk in a walker that looks like a big saucer shaped ship, Baby Scotty taking apart or building some elaborate Tinker Toy creation that could probably power a starship, and Uhura sticking things in her ear. For now we have little "Spocky" pinching other kids.
Posted by Eric Scales at 1:09 AM No comments:

The Drawergeeks subject this week is Space Girl. Here's my submission: 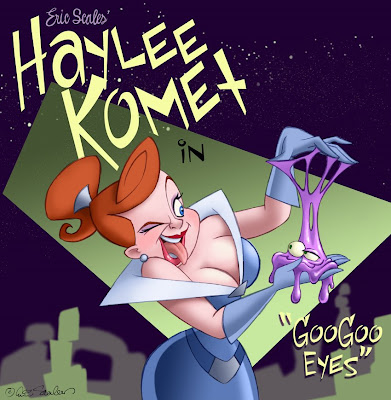 I really didn't intend to become as involved with this one as I did. Originally I was just going to paint it in guoache to see if I could get a nice 50's feel. Then after I got the sketch done I decided I'd just try some quick digital color. It just snowballed from there. The whole thing kind of ended up with a comic book cover look (with the exception of being square), just because I like doing big titles and I like the idea of this character having some horrible punny name.

Check out the other submissions here.