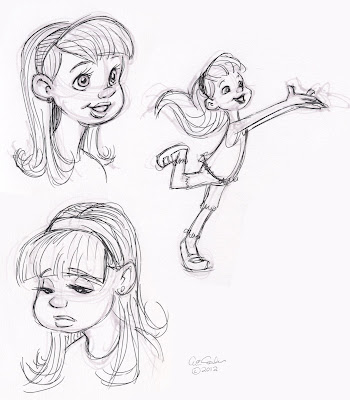 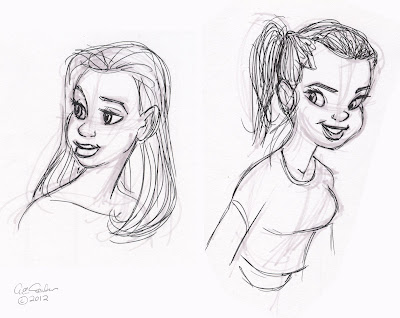 I fully admit, I chickened out on this last one- the horse moved, and I liked the girl so much that I didn't want to risk ruining it by finishing the horse's head from only my memory. 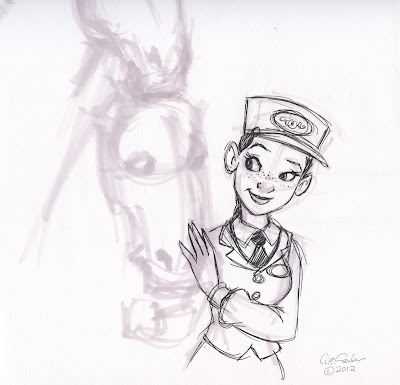 Posted by Eric Scales at 1:45 AM No comments:

How to make a Daniel Radcliffe Puppet

I have something a bit different for you today: my daughter had to do a biography report on someone, and she chose Daniel Radcliffe, the actor who plays Harry Potter on film. Here's a shot of old Danny boy. 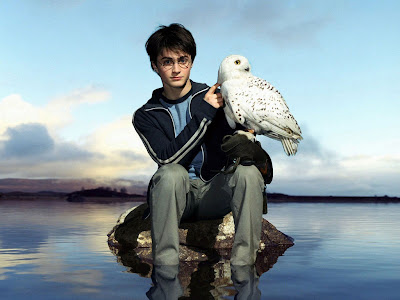 Aside from the written report, she also chose to make a puppet of Daniel. Being her loving father, I agreed to lend her some guidance in the matter. I googled various types of simple puppets and found something I thought would work at this href="http://www.sp.uconn.edu/~wwwsfa/library_howto_rodpuppets.htm">link, though I made some significant deviations along the way. We made a trip to our local craft store and picked up just about everything we would need. I don't remember the total amount but it came in under $20. 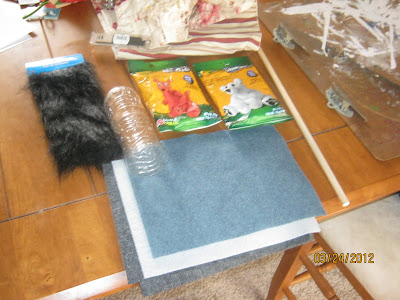 My daughter insisted that this had to be Daniel Radcliffe, not Harry Potter (that would have been far too simple), so the felt shown above was chosen with the wardrobe of a well dressed contemporary teen in mind.

Anyway, the very first step (not shown) was to take an empty water bottle, and cut off the neck. I did this with a sharp X-acto knife, and sanded the edges a bit just to make sure they weren't sharp. The bottle will act as the puppets torso. The upper slope of the bottle forms pretty good shoulders, and the hole where the bottle neck was, will allow your control rod, which is the puppet's neck, to come through. The next step is to add the arms. I deviated from the website plans slightly- their arms were linked pieces of wood. Since Daniel is going to have a coat on, I decided to make our arms out of string bulked up with a bit of Crayola Model Magic, an air drying modeling compound (we used it for many parts). I cut 2 small holes (again, an X-acto knife does this easily) where I wanted each of the shoulders to be, one below the other, and through these holes tied the string which I had made extra long (you can always cut it down later). The bulking up of the arms will come later, but below you can see one of the strings tied at the shoulder. 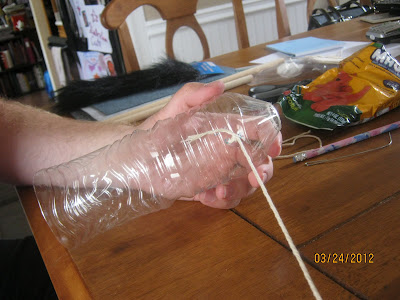 I had precut a wooden dowel to a length that allowed it to come out of the top of the bottle and still gave my daugther a good length to hold onto beneath the bottle. The operater's hand is supposed to control it from beneath the bottle, not necessarily inside the bottle so if you do this yourself make sure you make the dowel long enough. Aside from the head on top, we also needed something inside, to keep the dowel from extending too far up and making Dan look like a giraffe. The plans suggested a wooden ball, drilled with a hole to fit your dowel and glued in place. I didn't have either a ball that big or a drill bit that large, so I opted for another ball of model magic, what we also made the head out of. This was our biggest mistake and had to be fixed the next day. Model Magic takes a long time to cure, and more so if you keep moving it. Our constant movement of the puppet during the process didn't allow the ball inside to dry, in fact it slowly moved the ball down the dowel, leaving a coating of Model Magic in it's path, so that eventually Daniel had a long wrinkly neck. Though it's not shown in these pictures, we ended up removing the inside ball the next day, and creating a stopper from leftover felt. It was tricky to get onto the dowel and I won't bore you with those details, but if you do this yourself, I advise try something other than model magic for this inner stopper. This step is best handled here at the beginning and doing it after the fact could risk your puppet's head.


Anyway, below you can see the basic head, and that early, doomed, inner ball. Oh yeah, and the string arms. 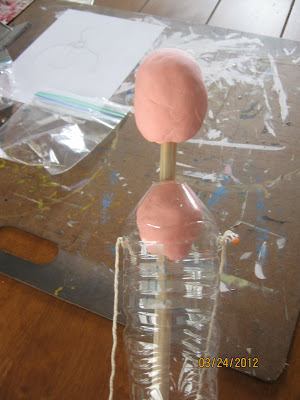 We covered the dowel between with more model magic (we used a lot of white Model Magic (MM) and just a bit of orange for that skin color). My daughter put on all the facial features (we had some blue MM leftover from a previous project for those eyes). 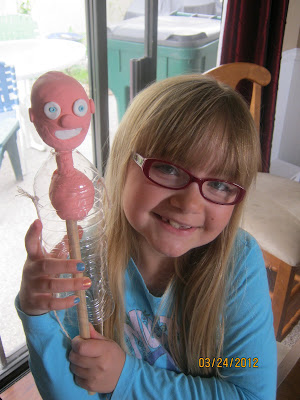 Next my daughter added some rolls of MM to the arms, just to give them some bulk. We were sure to leave bare string at the places we wanted to have the arms jointed (shoulder, elbow and wrist). Again, this probably wasn't the best way- the puppet arms might not last as long as they would had we used wood, but it was much quicker. 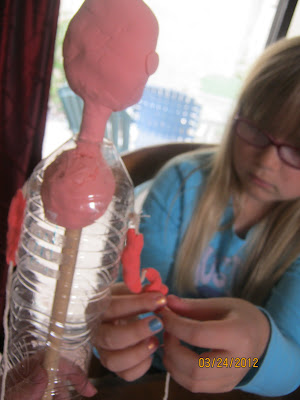 Next it was time to make him some clothes. We made him an orange shirt by simply hot gluing orange felt across his front (did I mention we also put MM around the bottle where his chest would show above the collar?). Remember the whole shirt wouldn't be unecessary because we were going to put a jacked over it, so only this front part needs to show. I don't sew at all but my daughter was able to stitch some tubes of felt together for jacket sleeves. 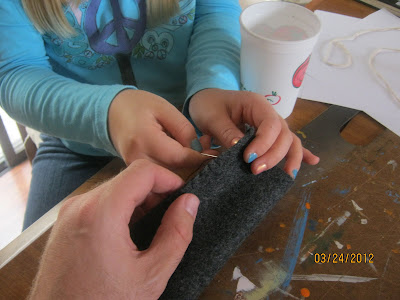 We slipped these on the arms (conveniently hiding that they were just strings) and glued the shoulder of the sleeve into place. There are all sorts of folds and extra fabric that would probably make a seamstress crazy, but we were careful that allof this will be pretty well hidden when it's all done. 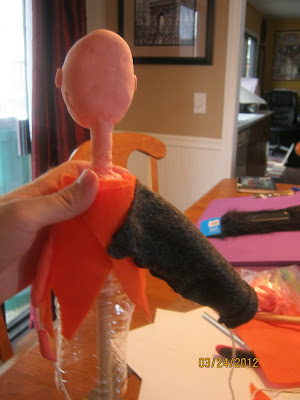 We then wrapped the whole lower part of the body with a blue felt, approximately the color of denim. I also found a cheap watch band to serve as belt. It wasn't long enough to wrap around his whole body, but it would only show in the front. We hot glued it in place and then glued small strips of blue felt into place where the belt loops would be. I think it's little details like the belt especially when made of dissimilar materials from the rest of the puppet that make it feel more high quality. It doesn't have to be something expensive, but it helps hide the technique better, and someone can't simply look at it and say how it was done. 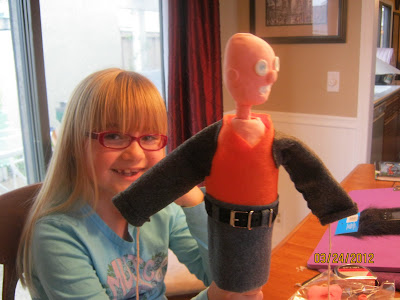 We couldn't find any brown fur at our craft store, so we had to settle for black. Through trial and error we were able to cut 3 pieces to fit on Dan's head. Be sure to cut fur like this from the back with an X-Acto knife. This allows you to cut the fabric, without trimming the hair on it. That way the hair stays nice and shaggy and hides whatever seams you create. Aside from his hair, you can see Dan's long wrinkly neck below, because that inner ball of MM was being pushed down the dowel by all our activity. Like I said, we fixed that later. 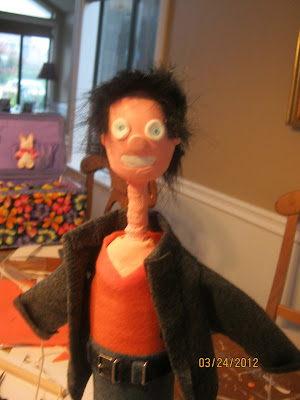 The next step was to attach the arm rods, coathanger wire that we cut to the right length, that would control the arms. We looped the end of the wire, tied the arms to it (reinforced by a bit of hot glue) and then cut the excess string off. 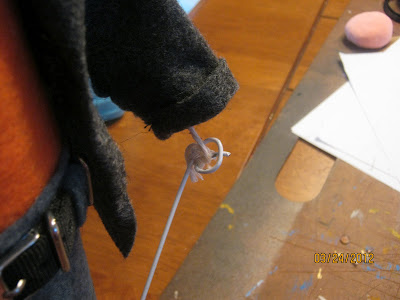 We then covered the loop of wire and the string knot, with a hand made out of MM. These hands were other parts that we had to be careful not to move too much until cured as the string and wire protruding from them would slowly widen the holes they were in and cause the hand to become loose.

We styled the hair a bit (as much as any teenage guy styles their hair nowadays) by spraying it lightly with hair spray and kinda' pushing it where we wanted it. A bit of trimming was required too, but not much. My daughter gave Dan some painted eyebrows and he was essentially done. 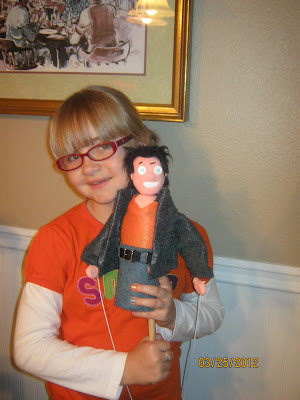 It was a lot more work than a paper bag puppet or something that she could have done totally without input from me, but she really likes it and hopefully learned a few things. Hopefully he'll hold up for a little while so she can play with him too.