I went through Google and doodled some old ladies to try to improve my caricature skills, which aren't too sharp. I'm happy with this first one, but the others feel a bit clumsy. 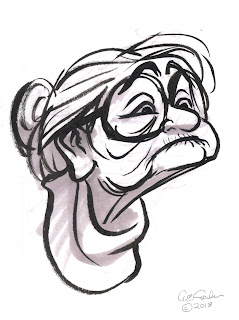 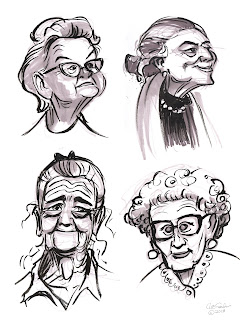 I find that I can't do a caricature in just one pass. The first attempt, like those above, usually just yields a simplification of what I'm seeing- it's a bit cartoony maybe, but doesn't feel exaggerated enough, sometimes not at all. However, I find that once I've done that first obvervational drawing, I'm a bit more comfortable with the subject. Having already converted it into a line drawing it's a bit easier to then take that and exaggerate it as I've done below. 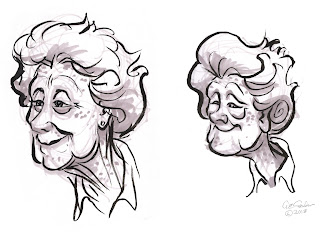 The one on the left was my first attempt, from a photo. The second was done without the photo, just using the first one as reference and then attempting to caricature it. Admittedly, the second one probably doesn't bear much resemblance to the original photo, but it feels like a more pleasing drawing to me. Once again, the lesson here, that I keep having to remind myself it seems, is that just because it's not right, doesn't mean you can't fix it.
Posted by Eric Scales at 6:30 AM