I find myself trying to avoid drawing the "gimmicky" animals- you know the ones God seems to have made to make us do a double take the first time we see them? Then I run out of ideas, draw one of these animals that have been used as endless fodder for cartoons and characters, and remember why they are such favorites- they're really interesting! I have a few more Koala's but barely have time to scan things nowadays. So for now, enjoy these. 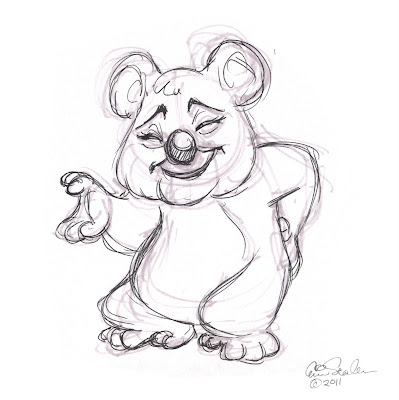 And a preemptive excuse- I knew Koala's had 2 thumbs on each hand, and suspected that they did on their feet also. But I drew most of these before really consulting any reference. Turns out the foot thumbs are on the outside of the foot, opposite of what I've shown. So if you were going to comment just to tell me I did the thumbs wrong, don't bother. 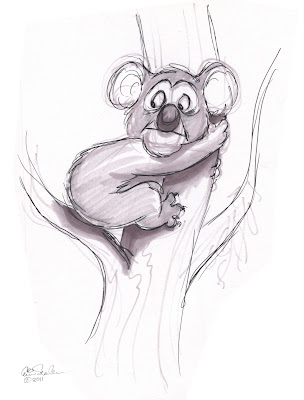 Posted by Eric Scales at 2:04 AM No comments:

Gone for a bit, but I'm back 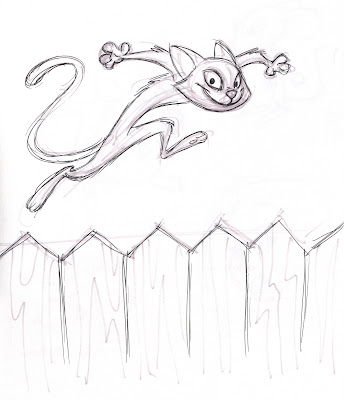 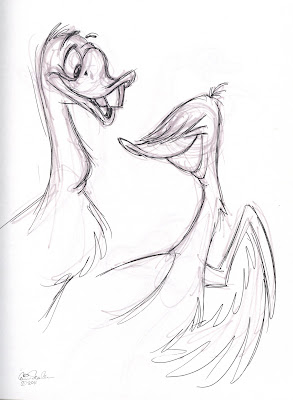 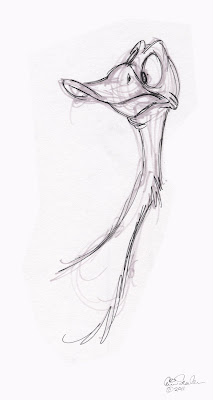 For those who haven't seen it yet, Andreas Deja, 30 year veteran of Disney Animation, has a blog. He's one of the superstar animators of the Renaissance of Disney Animation which occured in the late 80's and ended... well an end date for that renaissance differs depending on who you talk to. Suffice to say, Mr. Deja is wonderfully talented and has no doubt influenced hundreds upon hundreds of artists out there. I've been a bit surprised though, that his blog postings have been mostly, not about his own work, but about the older generation of Disney animators that he met and trained under. Great to see such stuff, and to hear that he was such a fanboy himself. But every time I read his blog, I think, why is he posting this stuff? This hero worship, that's the kind of thing us fans should be posting. So I am. 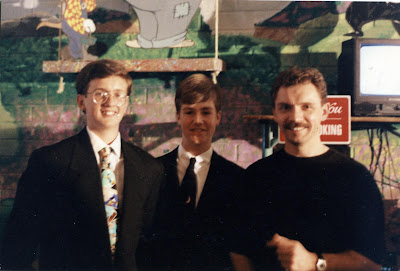 I first met Mr. Deja sometime in the early to mid 90's. I was a student at Rowland Animation and every year they had a big Open House. Students would show their work and it was well attended by professionals in the industry. The above photo is my friend Brian Kesinger, myself in the middle (and in the shadows), and Mr. Deja. I don't exactly remember the encounter anymore, but I'm sure I was too nervous to say anything very intelligent. But look at how cute we are- our best (and only)suits- we probably felt so important.

I met Andreas again maybe a year or two later. I was at an Animation Expo. I wasn't very good at promoting myself as an artist- the whole portfolio thing was still new to me, and for the most part a portfolio was something that I sent off to a studio so that they could then call me and tell me it was ready for me to come pick up again. I don't think I had ever had anyone of influence actually critique it in front of me before. So I'm at this Expo (probably overdressed in my suit again!), portfolio in hand, and over at the Disney booth I see Mr. Deja standing, watching the crowd mill around. I had been told that Disney would be holding portfolio reviews, in a room upstairs, and in fact I already had an appointment for that, but I thought, what the heck, I'm gonna ask Andreas to look at my stuff. So I did. I walked on over, introduced myself, and asked if he'd look at my portfolio. He was very nice. He went through page by page, offering comments. He couldn't have been nicer. Even when the line started forming. Pretty soon, you could barely hear Tom Sito's shouting about the Union because of all the calls of, "Hey look, Andreas is doing portfolio reviews!". Poor guy, I'm sure that he was not supposed to review portfolios, but he was just too polite to turn us down. I wonder how long it went on before someone from Disney put a stop to it. I heard a few years later that he still remembers and talked about that incident, though I don't know how true that really is.

Years later, my friend Brian (then a Layout Artist at Disney) had the Art of Animation from Mickey Mouse to Hercules book passed around the studio and signed for me as a birthday present. Most of the inscriptions are not fit to print (who knew artists were such a salty bunch? Ok, I know, we all knew that). Included was this signature (the drawing is printed on the page, not drawn): 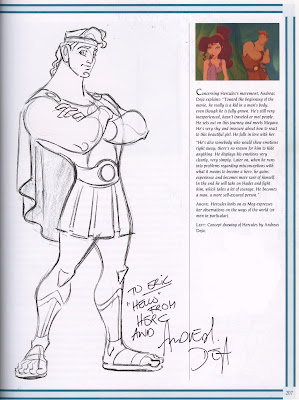 Have I even talked about his animation? Far more eloquent people than I have praised his characters (King Triton, Gaston, Jafar, Hercules...). My favorite is Jafar from Aladdin, I think the strongest villains that Disney has had in the more recent films ( 1992 is still recent right?) What I always liked about Jafar was how skillfully Andreas played Jafar's flexibly mouth against the rigidity of the rest of the character. In other words, it's very easy in animation to forget that the things you are drawing are supposed to be made of different materials with different properties of their own. Too often, even in so called "realistic" animation, a character moves like rubber, squashing and stretching equally througout his body. Our bodies really do have squash and stretch but, for example, our femur doesn't squash nearly to the extent that our calf does, despite both being involved with the same motion. Jafar is a great example of this contrast being used to it's fullest. His mouth is in constant motion, grimacing, smiling, or weaving a web of lies, though his face as a whole is almost a mask. There are no held cels, where only his mouth moves, but his entire rigid form often drifts and tilts as a whole with his tight cumberbund and stiff shoulder pads, while his mouth runs through the dialogue, and the two never seem at odds.

Anyway I've rambled on again (which is why I usually just post drawings with little or no explanation), but the point of this whole thing is, go check out Andreas' blog. And I'm sure he'll get around to posting his own stuff eventually.
Posted by Eric Scales at 1:10 AM No comments:

Hey, What's the deal with henhouses? 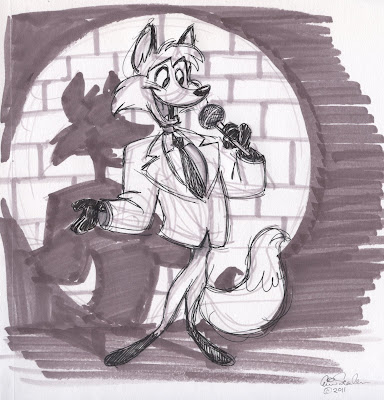 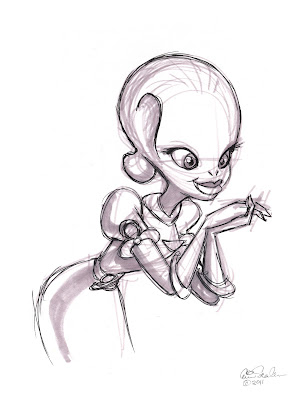 Posted by Eric Scales at 2:01 PM No comments: 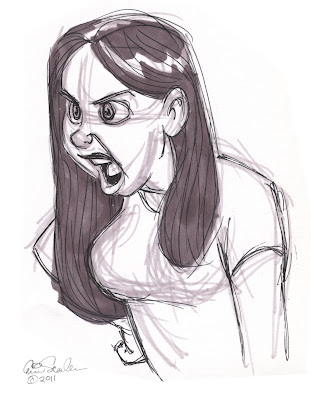 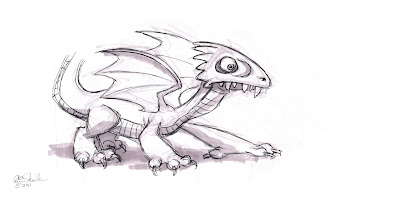 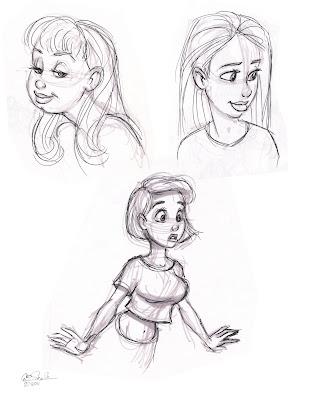 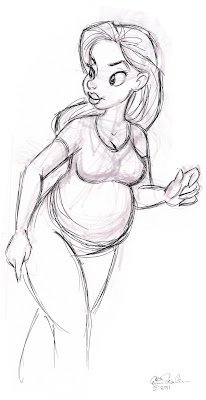 Posted by Eric Scales at 2:02 AM No comments: