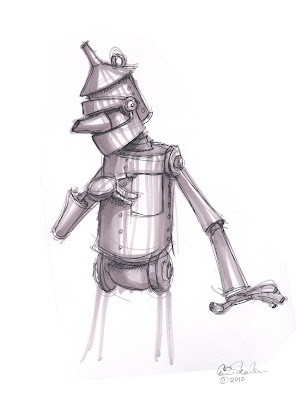 I don't think I'd ever drawn a dragon before I started this blog... 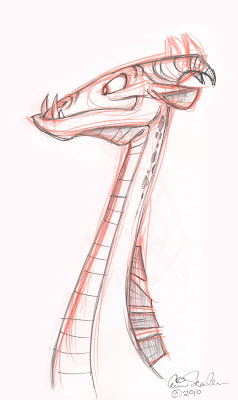 It's true! And suddenly I find myself drawing them all the time. 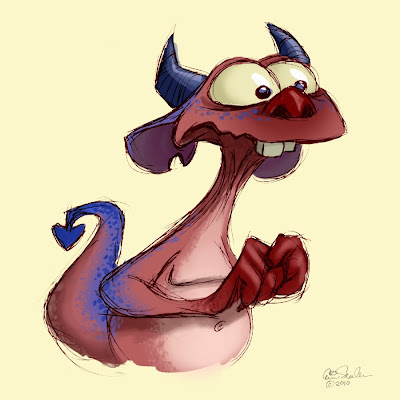 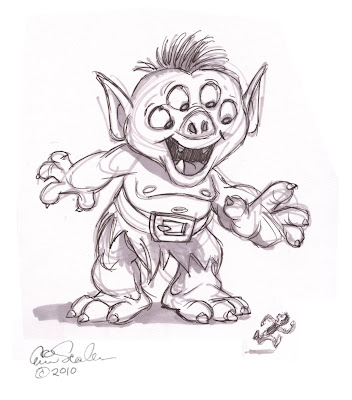 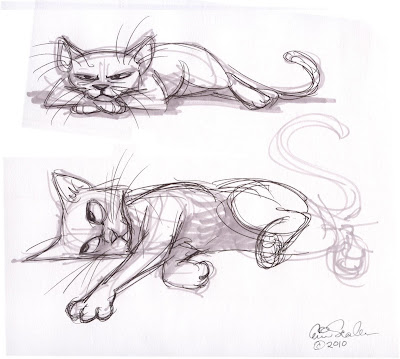 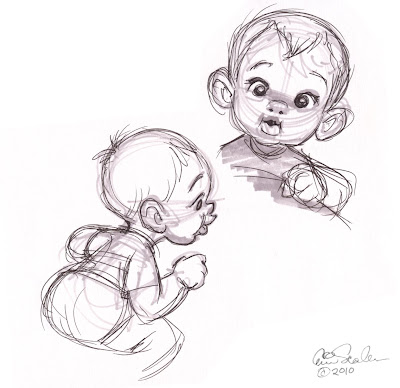 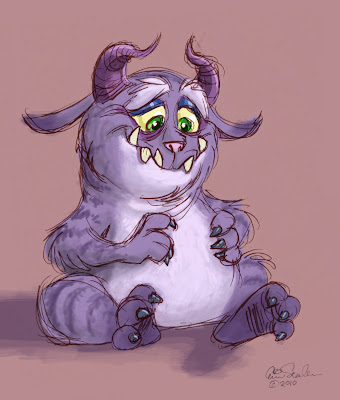 Just a really quick (sligthly sloppy) digital color job. I love using fanciful colors on these sorts of characters. I'm sure that stems from my love of the Muppets and all their colorful creatures.
Posted by Eric Scales at 12:01 AM 1 comment: 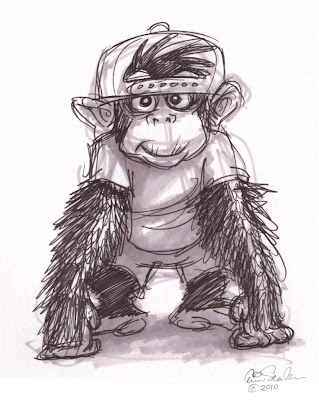 or a big head. 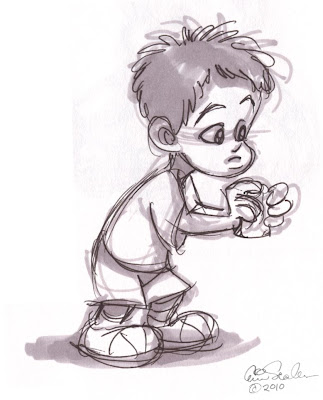 Going for a simpler look. I think this guy will be yellow. 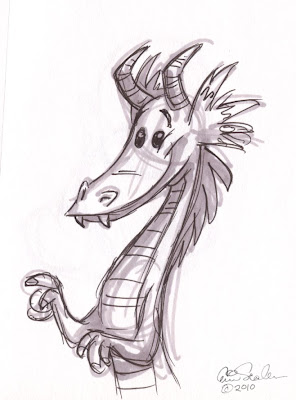 Posted by Eric Scales at 7:46 AM No comments:

Lil' Smokey gets some color 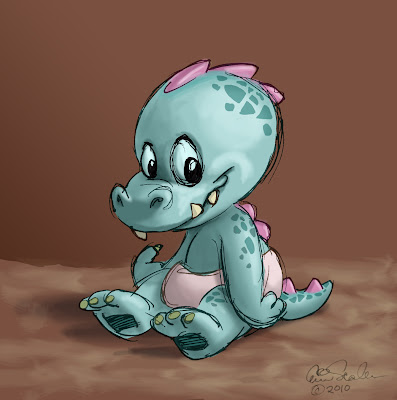 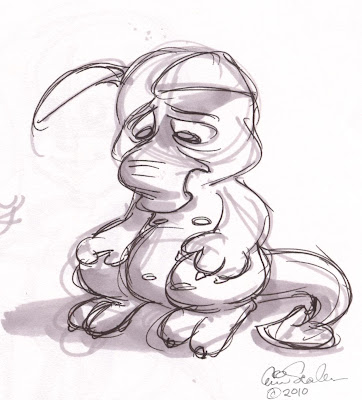 This may have been subconsciously inspired by Hooter in Captain EO.
Posted by Eric Scales at 12:05 AM 2 comments:

My 6 year old daughter loves to play a game called "Little Brother"- basically I pretend I'm her two year old brat of a brother, and she gets to be the older sister (usually 16-20 years old). Little Brother is obsessed with Spider-Man and Lightning McQueen and is always getting into trouble: getting into the candy jar, picking his nose, playing in the mud, and generally being a pain. This is what I picture him looking like. They were not done to specifically depict little brother though so this kid is a bit older, but the personality is the same: loud and obnoxious, very self assured. 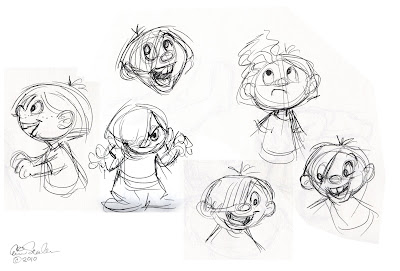 The part Sabrina loves about the game is she is the authority figure and gets to tell little brother , "No!". She gets to grab his shirt as he goes for candy or drag him to bed without supper. Little Brother is a fascinating game to play with your kid, if for no other reason to hear their approach to child rearing, but it's also exhausting. It takes a lot of energy to be a bad kid.

I don't know why I didn't continue to put a cleaner line on these... 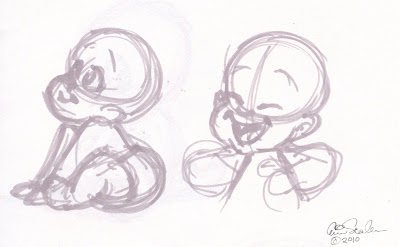 but I kinda like them as is. Especially the one on the left. 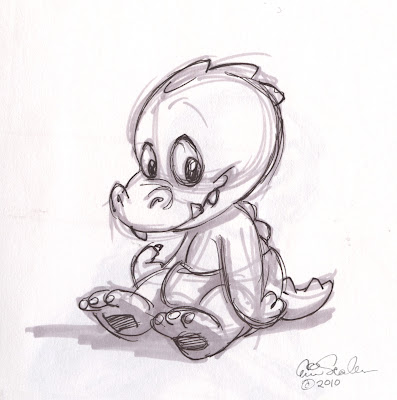 To the Neighborhood of Make Believe...

I decided some time ago that I'd love to do a series of illustrations depicting the puppet characters of Mister Rogers' Neighborhood. As I've said before, this show had such a huge impact on me growing up, and yet unlike most kids shows, I didn't ever see any merchandise for it. I found out later in my adult life that there was quite a bit of merchandise- books, toys, and records- for some reason I just never saw them as a kid. I was fairly disappointed in the quality of the illustrations though. The flaws ranged from total inaccuracy of the characters and places depicted, to more nit picky stuff like making the puppet characters more human sized. In short, I definitely had opinions about how I thought this sort of thing should be done.

So, in my illustration I wanted to be sure that the puppets were depicted fairly accurately. I'm not opposed to showing them walking around as they have in other books, using legs that they obviously didn't have on the show, but this should be kept to a minimum. Also they should be kept puppet scale. Another thing I wanted to depict were the human cast members interacting with the puppets, something that was never done in the books. I thought a quiet moment between Lady Aberlin and Daniel Striped Tiger would be a good recognizable moment to depict. This scene occurred countless times over the course of the programs run. Daniel's favorite way to show affection was to rub noses with someone and say "Ugga Mugga". 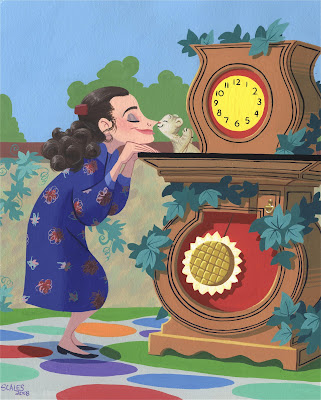 I'm not a caricaturist, so the one thing I really am not happy with is Lady Aberlin's face- I wanted a very stylized look for the humans, but someone more skilled at caricature probably could have gotten a better resemblance. But overall I'm quite pleased with it. It also confirms my theory that seemingly unimportant details like the colors of the wall, distant hill, and surrounding ground really do say "Neighborhood of Make Believe" just as much as Daniel's clock does. That's something that other books seem to have played a little more loose with. I guess those illustrators were trying to expand the Neighborhood beyond what the show could depict on it's limited budget, but to me it always reeked of disregard for the details of a beloved show.
Posted by Eric Scales at 8:39 AM 5 comments:

Kids can be such MONSTERS! 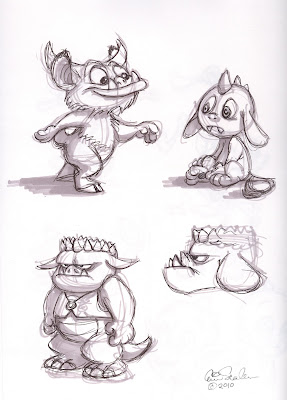 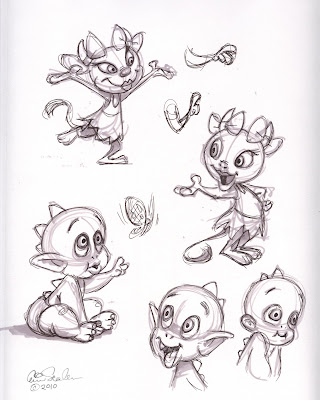 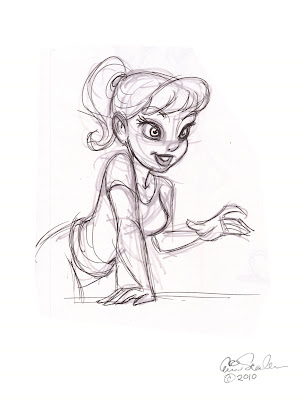 Posted by Eric Scales at 1:06 AM No comments: 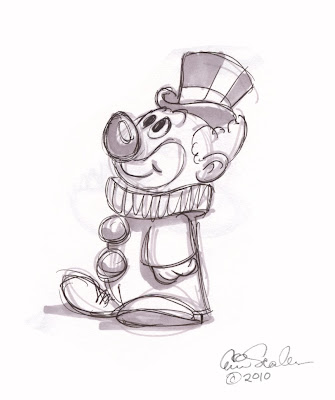 Posted by Eric Scales at 1:05 AM No comments:

Still trying to sharpen my digital painting skills. I just recently learned that I had never loaded the drivers that came with my Wacom Tablet, and what a difference that makes! Suddenly the pen is pressure sensetive and tapers to beautiful points. 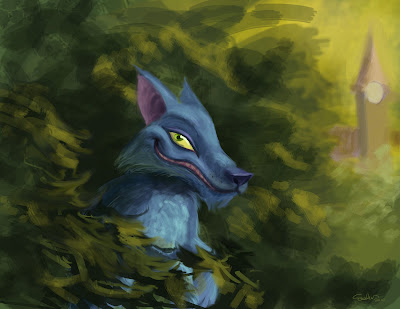 I had mentioned in a previous post about how frightened I was of wolves growing up, and the above image is another attempt to tackle some of those imaginary childhood demons. My daughter doesn't think this guy looks scary at all, but he sure freaks me out. The background was really more of an afterthought and isn't nearly as refined as the rest. Still, in my mind he's just outside of some middle age European village. Of course, wolves have to stay close to villages because that's where all the kids live...