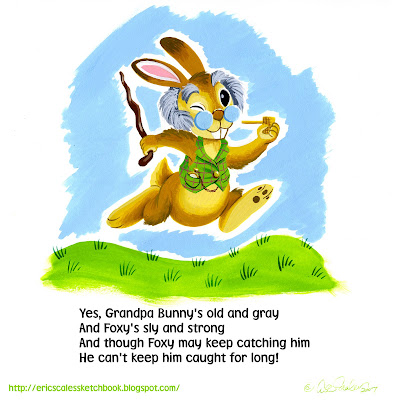 The theme on Drawergeeks this week is "Rabbits". This entry has a lot of influences: It's a little bit "Little Golden Books", a little Richard Scarry, a lot of Uncle Remus' Brer Rabbit and maybe just a little "Prarie Home Companion" (since that's what I watched while painting it, though the whole concept came to me much earlier). I think the Golden Books (Poky Little Puppy and Tawny Scrawny Lion especially) stuck with me a lot when I was young, and even though the illustrations were somewhat simple by today's standards, they were very effective. Even living in Orange County suburbs, I think I liked the little illustrated peeks into the forests that these stories always took place in. So anyway the theme "Rabbits" instantly conjured up one of the cuddly clever animals from these mid century storybooks.

There's no more to the story than this verse, but it may be fun to write the rest of it someday. Check out the other entries here.
Posted by Eric Scales at 9:23 AM