You may remember my mentioning a friend of mine, one David Scott Smith, who draws the webcomic, Space Base 8. Dave and I have worked together at "the day job" for several years and I’ve always been impressed by his talent. In this age of ever increasing amounts of digital artwork, Dave’s traditional gouache work is always beautifully executed. As someone who still feels like he’s finding his own style, I’ve often found myself aiming for that “Dave Smith” look when I’m planning out an illustration. This generally means that the background should have a strong layout and a nice simple color scheme. A little more than a year ago, Dave told me he was thinking of starting his own web comic. "Yeah right," I thought, "till something shiny catches your attention". Well, I am pleased to say that Dave's path must not have been crossed by any shiny objects, because Space Base 8 not only launched but has managed to stay aloft in the ether of the interweb, and has proven to be both a beautiful and entertaining strip. I thought it would be interesting to interview Dave here and delve into how SpaceBase 8 came to be.

ES: So Dave, why don’t you tell us a little bit about your art education? 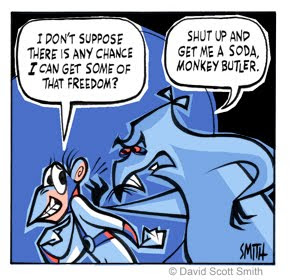 Cargo, the star of the strip, finds himself in a tight spot with some giant alien rodents.

DS: When I was a kid my parents bought stacks Walter Foster art books for me at yard sales, and this was my first art education. One of my favorites was called “Animal Expressions”. It showed step-by step how to draw chimp faces, which has turned out to be some important art instruction for me. The best book, though, was Preston Blair’s “Animation” book. I read it until it fell apart.

I have a BFA in illustration from California State University, Long Beach. I am so glad I took color theory class. I am not too happy with the color work I do now, but you should have seen it before that class!

ES: That’s ridiculous- your color sense is brilliant. But these interviews tend to make the subject look a little arrogant so for the sake of letting you appear humble I’ll let your comment remain.

ES: I know you’ve told me you were an avid Comic Book Reader as a kid- which ones in particular did you like?


DS: I really liked comics like Richie Rich, Casper, and Hot Stuff. The linework in those things has a clarity and charm that I would love to get into my work today. I also was a big comic strip fan. Peanuts and Calvin and Hobbes were always my favorites.
I got into superhero comics when I was older, but now I prefer cartoony comics, like the stuff I read as a kid.


DS: Star Trek. The original one. Sid and Marty Krofft kid’s shows like H.R. Puffinstuff, Lidsville, Land of the Lost, The Lost Saucer, and the Far Out Space Nuts. The sillier the better!
Star Wars. The original one. Anything by Rankin/Bass, like those great Rudolph the Red-Nosed Reindeer shows. I loved Happy Days Mork and Mindy, even though now I think they are hopelessly unwatchable. I think my joke writing is heavily influenced by all the junky sitcoms I loved as a kid. 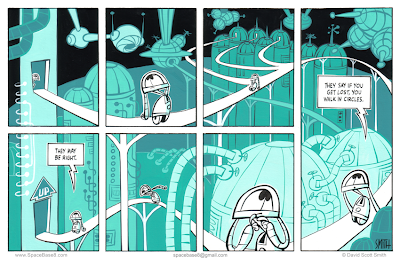 The robot, Lighthouse, wanders through the endless maze that is Space Base 8.
The strips color style will consistently wow you.


ES: And I know Monkeys are a big thing for you- ever work as an organ grinder or something?

ES: So tell us a little bit about Space Base 8.

DS: In Space Base 8, my online comic strip, a space monkey named Cargo tries to deal with life on a space station where everything is illogical, irrational, and unfair. So it’s like real life, but funnier. And in space. And with monkeys, and robots, and rocketships.

ES: How long did you actively work to develop Space Base 8 before it’s premiere?

DS: The concept had been brewing for more than a year, and I worked for four or five months to make the first forty strips before I put them out there online. So I started with forty finished strips ahead of schedule. Now I am down to three strips ahead. It is hard to keep producing comics on a regular schedule.

ES: Can you outline how a basic strip for Space Base 8 is created?


DS: I start at the computer. I type the dialog directly into a comic strip template I have prepared in Photoshop. This gets the rough draft lettering done at the same time as the joke writing, which saves me time. Then I use a Wacom tablet to rough draft the art onto the template, and position the art and lettering in the template so it all works together. Getting art and type to work well together is very important in comic storytelling, and working digitally allows me to easily rework things until they are just right.
I print the rough draft and tape it to the back of a piece of bristol board. I use a lightbox to see through the bristol to my rough draft, and use it as a guide when I do the lettering and final drawing. I use speedball dip pens for lettering, and a brush for the line art.

ES: With comics no longer being confined to the printed page, there are a variety of styles in today’s webcomics. Even so, the style of Space Base 8 stands out- not only the way you draw the characters but also the way you’ve chosen to do the color. Where did that come from? 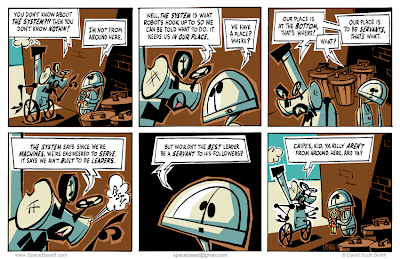 The older models of robot are steam driven (of course!)
Here one of them tries to fill Lighthouse in on "The System"

DS: I take some inspiration from Mid-Century Modern design and 50s illustration and animation, but try to let it only flavor the strip, not dictate the style. I really enjoy using a brush to make calligraphic linework with a lot of thick-and-thin variation, so put that into the style of the strip, too.
The coloring style came as kind of an accidentally-on-purpose situation. When I first drew my characters in black outline against a solid black outer space background,I saw that it hid the cool linework I worked so hard on. To solve this, I put a lighter color outline around the black outlines. Since that worked well, I started leaving a space of lighter color or no color at all around the characters all the time, leaving a kind of halo around them that sets them off from the backgrounds. I have started to use this halo in an expressive way. So if a character is angry, his halo might get more jagged or something like that. And it turns out that you can see this type of thing in Mid-Century design too, so it ties in well with the look of the strip. I also like to let the colors fall in and out of the linework, to give it a funky modern feel, like the colors are out of registration a bit from the lines. I have had some fun with that.

ES: That’s an accurate description but doesn’t really do it justice. The simple blocks of color really do make the strip very striking, and I think the overall look instantly puts people in that hokey sci-fi frame of mind.

DS: Thanks, I’m glad to hear that. That is pretty much what I’m going for.

ES: The Base (that’s what us uber Space Base 8 fans call it) is populated by some pretty unusual characters- robots, all manner of aliens, and of course Cargo the Rocket Crash Test Monkey. Not to ask you to choose a favorite among your children, but do you have a favorite character in the strip? Maybe one who’s particularly fun to write for or who comes more naturally than the others?


DS: I get a kick writing and drawing Oril, the unmotivated, time-traveling temp worker. I plan on doing a one-shot comic book starring Oril someday, with lots of “Back To The Future” -type time travel fun in the story.

Oril- Dave gets a kick outta' him.


ES: Any hints on what readers can expect from Space Base 8 in the future?

DS: Well, what I will try not to do is introduce more characters. There are already too many characters in the strip. I will put existing characters together that have not interacted with each other before. That will be fun.

ES: Can we look forward to a book of your strips anytime soon? T-Shirts? Cargo and Vesto action figures? An adhesive third eye so you can look just like Oril?

DS: Book and merchandise will come eventually. I plan on offering the original art for sale too. But right now I have enough trouble making time to produce three comics a week, so I’m mostly focusing on just getting the strip done. The good news is I’m getting faster at producing the strip, so pretty soon I should be able to move on to getting these other things started.

ES: Do you have any final comments for someone who wants to become a comic strip artist? Any resources you can reccommend?

DS: Absolutely. The book ‘How To Make Webcomics” is the best thing out there. It is written by the guys at Halfpixel.com, four successful web cartoonists who have been doing webcomics for a long time. They also did a teriffic podcast called Webcomics Weekly. Unfortunately, they seem to have stopped doing the podcast, but you can still find the old episodes online or on iTunes. I really can’t recommend the book or podcast more. They give all kinds of great advice for beginners and professionals, and they are really fun to read and listen to.

ES: Thanks Dave. As always, it’s great talking to you.


For anyone who missed it, you can find Space Base 8 at this link. Space Base 8 runs new strips Mondays, Wednesdays, and Fridays (barring unexpected intergalactic phenomena). You can also find more info about Dave and Space Base 8 at Dave's blog, MonkeyAlwaysWins , or become a Space Base 8 fan on Facebook. And you can check out some of Dave’s other work, or see his resume, or ask him a question at his webpage. By the way, all artwork in this post is Copyright David Scott Smith.


Until next time, keep those pencils sharp and those sketches coming!

Thanks for an interview of a brilliant child I used to know, who grew up into this really cool comic artist. And yes, his sense of humor showed then, too. (And I occasionally still play my childhood accordion. The youngest grandkid didn't know what one was.) >|<